Barbie have created dolls with disabilities, skin tones, hair and body sizes. Yes, you heard me right! Barbies now come in actual figures we can relate to!

For may years, Barbie dolls have been an unreal ideal for young people around the world and therefore many people dont feel as though they are represented with these dolls. The original dolls have the small hips, long legs, big boobs but that just isnt real for the majority of people and it set unrealistic standards for young people. But this is all about to change. 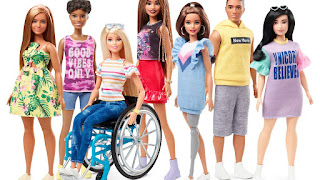 Look at the diversity between these dolls. Admittedly, there could be more but this is a start! The Barbies are finally heading a step in the right direction towards better representation and empowerment for all.

According to Teen Vogue, Culmone worked with disabled people to design a Barbie doll that would be a more accurate presentation. Barbie’s team worked with UCLA to design her wheelchair, which will fit any Barbie in the “Made to Move” collection. Culmone did not say if the new wheelchair will fit inside the Barbie Dream House or other accessories.

Mattel also worked with Jordan Reeves, a 12-year-old who has a prosthetic arm. It was Reeves’ suggestion that Barbie’s prosthetic leg be removable for a more realistic doll.

Although this is a good step towards acknowledging and celebrating diversity, I hope they make them as visible as their other dolls are. Part of me thinks that people will be going crazy for them but on the other hand, I am wondering if it will only really be people who relate to the dolls that buy them- which, if so, it extremely upsetting and it would be a reflection of our society, if you are going to make these dolls, they can't just be found hiding online, they need to be involved in a campaign to show that everyone is equal and diversity is a good thing rather than something that is frowned upon or different! They should be everywhere so they become the norm for kids that walk down the shop aisles and then they will truly represent the real diversity in this world.

I think another great idea for the Barbie creators to definitely do would be add on items that could be added to any doll which is already owned. For example, a walking stick, full arm brace crutches, breathing tubes, ports, stoma bags, dog for the blind and so much more, these could cover so many medical needs and make young children going through a hard time feel less alone!

I am sure the Barbie dolls I had as a child had large holes in their ears for putting earrings in. Hearing aids or a cochlear implants could even go into those holes and be sold as an accessory to add to any of their dolls. Even a wheel chair could be an add on so children can get the wheel chair and use it with which ever Barbie doll they want to which fits their ethnicity, body type ect.

Even simpler, this could even be something as simple as various medical alert bracelets to cover unseen, like diabetes, heart, autoimmune, etc... Even the prosthetics might be able to be made so they can go over an existing doll's arm or leg. Do this so that children can have a doll that looks like them, their friend or even a family member.

I think Barbies next dolls could also have other medical conditions. I think a Barbie with Down Syndrome would be an amazing toy for all children as it would teach them that everyone is equal just because it is represented there. I know that people have been asking for this for years and I 100% definitely agree that this one has to come at some point in the near future, but a bald Barbie should definitely be on the cards because there are so many children suffering with things like cancer or alopecia who feel so alone and sad because they have lost their hair and would benefit greatly from a bald Barbie.

Regardless of what Barbies could be, we have seen them make a lot of progress in acknowledging the diversity around the world and I am extremely grateful for that. I hope the creators see the demand for add on medical items and persue it to make other medical needs included.
Posted by Ebony Lyons at 4:59 pm