Studying With A Mental Illness

Since exams are not far away, I thought that I would do a post on revising with a mental illness, as I know how challenging it can be to revise when you're feeling upset ect. I hope this helps some of you, even if you don't have a mental illness.

• Revise in places that aren't in your house- For example, in a coffee shop. This can help you stay motivated as you can't take a nap in a coffee shop. Also being in public and being surrounded by others will allow you to feel less isolated. People can be motivating. If it is in a coffee shop there is also the cake and coffee part of it- massive positive!

• Revise in short periods- take breaks. There is nothing worse than wearing yourself out through revision because when you come to revise another day you'll feel less motivated. Work out when your concentration is at its highest and revise then. Not sure why but I am usually more focused at around 12pm-3pm and 12am-3am but more in the ams.

• Take things slowly- make a list of things that you need to do, be specific, split big tasks up if they seem big. I know I get overwhelmed easily with big tasks so I like to split them into bits. Estimate how long each task will take and write when you're going to do it. Slowly work through the list.

• Nothing has to be perfect- revision is only making notes, it doesn't have to be perfect- no one else is going to see them. However, if colour and prettiness helps you to learn then let your creativity run wild.

• Don't beat yourself up- if nothing is going in then there is probably no point in carrying on and trying to force it in there, it could possibly make your mental health worse. There might be days when you can barely get yourself out of bed, just know that you have the ability do succeed.

• Drink water- stay hydrated. Water will help you to be more focused as you revise and It is also said that water consumption may alleviate anxiety, which is known to have a negative effect on exam performance and revision.

Good luck, stay focused if possible, keep revising- I hope you all do great!

On the 19th and 20th of February, I attended Lucy Spraggan's acoustic tour. Birmingham the first night and Stoke the second. The first gig of the two days was my first time at one of Lucy's tours, as I had previously not been allowed to go, however it was not my first time seeing her live.

Birmingham
Me and Georgie got the train to Birmingham and tried to find the venue. This gig allowed me to meet some of the sprags that I met on the internet, mostly Twitter, who i wouldn't have met otherwise! We were queuing for around 5 hours I think. We queued with Tyler and Lois to start with, and as the day went on, Shannon, Louise, Kelsey, Jade (Kelsey's sister), Megan and her dad joined us.

Lucy kicked off the night with her song, 'Coming Down,' this is one of my personal favourite songs, so I was happy. As the night went on, Lucy played many of her songs from her different albums, not just her most recent. This included, the song her and her fiancé, Georgie, are going to walk down the isle to, 'Skylights,' her humorous song about the day time TV show, 'Jeremy Kyle,' the song that showed how wild her drunken self is, and which kicked off her career, 'Last Night,' and one of her most popular songs, 'Unsinkable.' Lucy ended the night with my favourite song of hers, 'Uninspired,' which is about the period of time when she felt uninspired, when she couldn't write music, but thankfully she is no longer uninspired!

In true Spraggan style, after the gig had finished, she met everyone in the venue, even though there was a curfew, which was at 10:00pm. I waited to be the very last person to meet her as I hate people watching me. While I was waiting Lucy's fiancé, Georgie came out, spotted us and came over to us with open arms. I felt so welcome, and accepted. We stood talking for a bit and then took some pictures (after Georgie Seaton had a scream about the camera), and said bye, as Georgie had to get on because of the curfew and continued to wait for Lucy. When I got to the front of the queue- finally! I went to Lucy, we took a photo and she signed my case and things, but it was really rushed and I felt pressured. Despite this, it was one of the best nights of my life and I'm so happy that I got the tickets. I didn't think that anything would be able to top the night off, however, Stoke was even better.

Stoke
Lucy's gig at Stoke obviously had the same set list as Birmingham, but somehow, Stoke managed to top Birmingham, despite the technical difficulties that Lucy was so worried about. To us, in the audience, it sounded normal, but to Lucy, it did not.

We left our house at around 10:45am, and we arrived at the venue at 12:00pm, which was only 7 and a half hours before the doors opened- only! But I would wait any amount of time for Lucy. As we waited the staff of the venue kept popping out to ask us if we wanted a hot drink or anything, which I thought was really lovely of them, and they informed us that Lucy and the crew would be arriving at 4. 4:00pm came, and dead on 4, they pulled around the corner. As soon as Georgie got out of the car, she came and hugged me, which made me feel really special, it made me really happy. Lucy said hi too, then they both went inside with Steve, and Lucy said she would be out in a minute to take photos with us. When she came out, she came to us first. She brought Steve with her also, and took photos with us (after mum sorted the camera out, and Lucy took a photo of my boob). I also gave her a card, which was for her and Georgie, in which I thanked her and congratulated them on their engagement, she opened it inside the venue later on, and tweeted me saying, '@mileynoticedme thanks for the card 😻'.

When 7:30pm finally came, the woman from the venue made sure that we were let in first. I got right at the barrier, right in front of Lucy's mic, so I was extremely content. The Dunwells come on, and they were great, like in Birmingham but all I wanted to see was Lucy.

Again, Lucy started with 'Coming Down,' and continued to play the set list, the same as the night before. Lucy's song 'Don't Know Nothing Bout The Blues,' isn't one of my favourite songs of Lucy's, but it is a good song, and very humorous. Before she plays it, she says a piece about how one day she was playing a set in a blues bar and someone at the front said, "You're in a blues bar, and you're not playing blues music." This "pissed off" Lucy so she wrote this song. And, well, I was that man (kind of). It was a shame that there was technical issues on the night, as Lucy was really frustrated, which is a little upsetting to see and Ben was running around. However, it was a little bit funny, as Lucy was constantly pulling faces and things.

As before, after the gig, Lucy met everyone in the venue, and with no curfew we got to spend a little longer with her. Again, I waited until near enough the end. While I was waiting, Georgie asked me where I was, she came to find me and she had a chat with us, which was really lovely of her to do, and we took another picture together. When we got near to the front of the queue, Georgie pushed us in front of a bunch of people, and was like "they've been waiting ages." Soooooo, then we got to meet Lucy! I went first. She said "Hi sweetheart how are you?" and I replied. She asked if I wanted her to sign my copy of her home EP, which I did and as she was signing it I noticed her write my name, like she knows my name?! Wow, ok. She said thank you for coming out and things, and I remember her saying to mum, "How do you make them so tall?" and that is literally a quote that describes my life. I didn't think that it would be able to top Birmingham, but it did. It was absolutely wonderful and I cannot wait for next tour!

Note for Lucy/Ben/Georgie/Anstey: Thank you all for everything you do, you're all wonderful human beings. Thank you for making tour so awesome for me. Hope to see you all soon, lots of love. x

I am going to post some photographs below to document my wonderful 2 days, in the order that they happened: 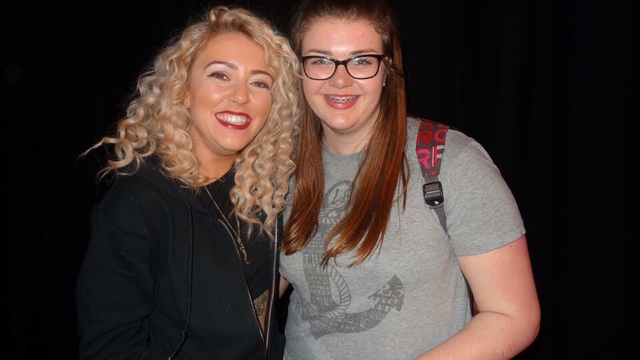 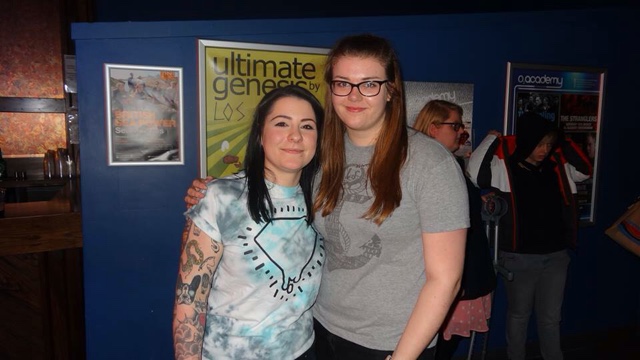 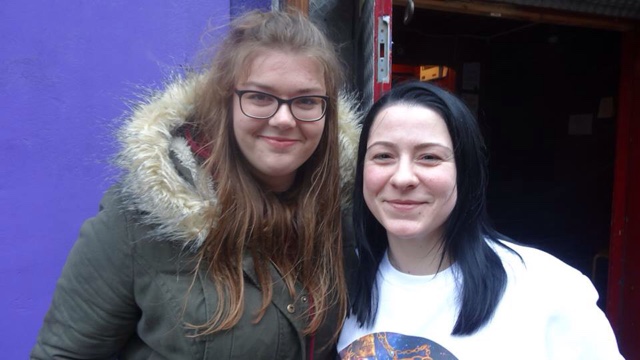 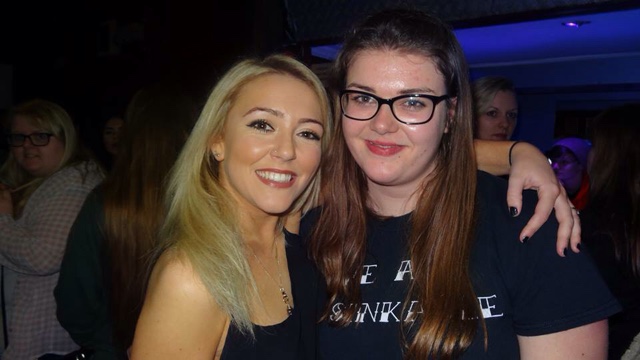 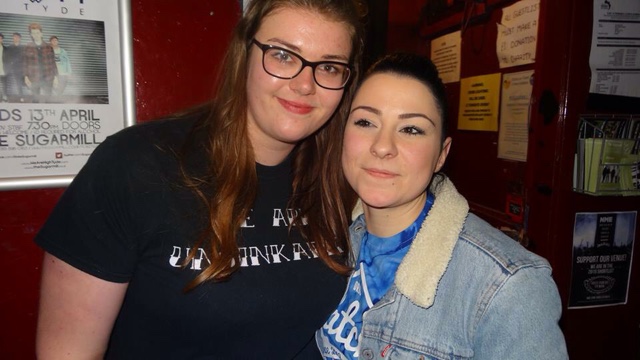 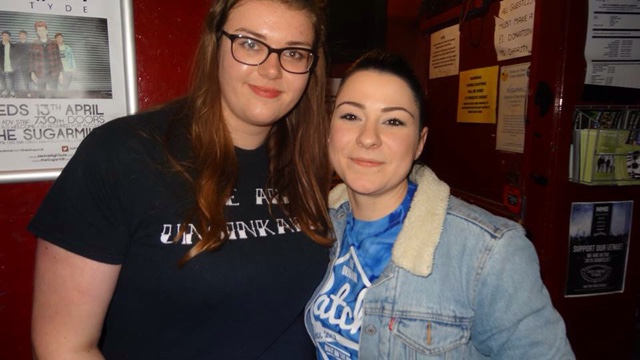